Sunny and Breezy here in SF

No hats worked on yet today, trying to get some computer work done even though the hats are calling to me. I miss them already.

Yesterday i went on a tour of the SF MOMA, to scheme and plan for this wonderful event full of Bay Area Makers, organized by the Kitchen Sisters, AIR, and KQED. We are coming together to share our craft with the public in a weekend long showcase at the SF MOMA on Thursday & Friday, May 30 & 31 / Saturday, June 1. It’s an honor to be participating alongside in other great makers in a great museum that has held my fascination for the many years I’ve been a resident in SF. Come see Paul’s Hat Works on Friday and other local talent all weekend at the MOMA during their last week open before they close for expansion construction for over two years. Art and craftsman! Read more about the SF MOMA closure here SF MOMA Expansion and FAQ.

And Read more about the Event Below, theres some extra special guests! Can you guess which are my favorite? 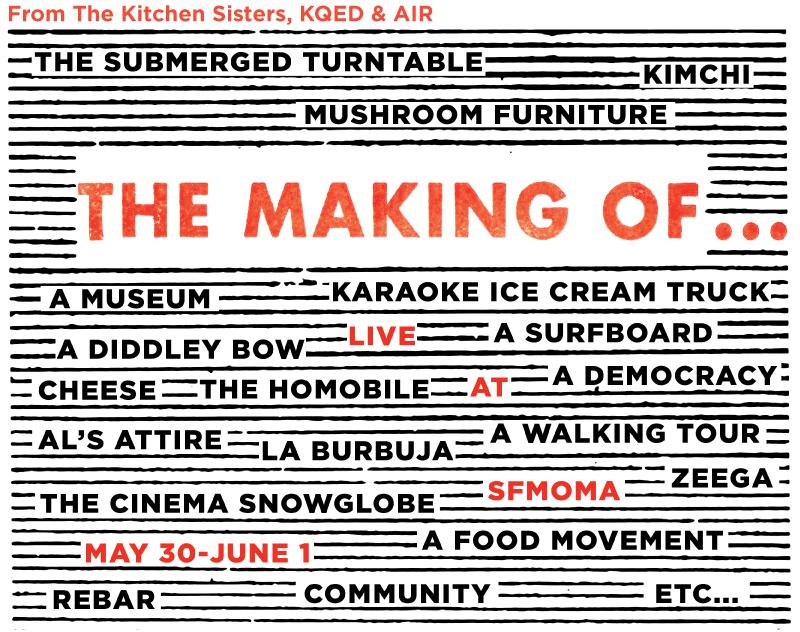 The Making Of… Live at SFMOMA

From The Kitchen Sisters, KQED & AIR

On Thursday and Friday, May 30 and 31 and Saturday June 1, The Kitchen Sisters and KQED present “The Making Of… Live at SFMOMA,” inspired by their radio series “The Making Of…” about what people make in the Bay Area and why. Over one hundred makers will present their work, process, and expertise over the course of the 3 days, filling the museum with inventions, contraptions, art, food, stories, music, imagination, community.

As SFMOMA closes for renovation and expansion, a vast community of makers from throughout the region come share their skills and crafts and tell their stories. The Kitchen Sisters will host three days of drop-in demo and conversation tables and presentations. Thursday and Friday will conclude with a daily maker’s talk and gatherings.

“The Making Of… Live at SFMOMA” captures the art, creativity and innovation going on in backyards, workplaces, cultural institutions and public spaces throughout the region. This three-day event is part of SFMOMA’s Countdown Celebration and entrance to the museum is free.

Some of the people and projects to be featured include:

The Making of… Los Cenzontles: Linda Ronstadt & Eugene Rodriquez speak about the creation of a Mexican community art center in San Pablo. The Making of… Cheese, with the whizzes from Cowgirl Creamery. The Making of… a Surfboard, with legendary maker, Danny Hess. The Making of… Creative Growth, a non-profit visual arts center for artists with disabilities in downtown Oakland.

From The Workshop Residence in Dogpatch, The Making of… Mushroom Furniture. From San Jose, The Making of… The Karaoke Ice Cream Truck. (Yes there will be ice cream, and pizza, and kimchi, and chocolate and more).

We’ll witness The Unmaking of the Typewriter from Jeremy Mayer who disassembes typewriters and reassembles the components into full-scale human and animal figures. The Re-Making of… the Internet, with Zeega. The Making of… The Submerged Turntable, a sound generating sculpture by Bay Area artist, Evan Holm.

The Architects and Designers of the new SFMOMA tell the story of The Re-Making of…a Museum.

The inspired folks behind Mission Street Food and Mission Chinese, along with restaurants from across the Bay Area, including Tartine Bakery, Bar Tartine, La Cocina, Tacolicious and more will demo and explore the making of a charitable food movement.

And look for La Burbuja (The Bubble) in the Atrium, a silver mobile recording booth with cushy pink interior that is part of Sonic Trace, KCRW’s radio storytelling project that chronicles immigrant stories in Los Angeles.

And much, much more. (See a full list of participants at sfmoma.org).

The Making Of… is a community documentary project that celebrates imagination, creativity, skill and ingenuity.

Who is making what and why? How do they do it? Who did they learn it from and who are they passing it on to? Is it a dying art or a living one? Does it matter? Come to SFMOMA and find out.

The Making Of… is produced by The Kitchen Sisters, KQED Public Radio, and AIR (The Association of Independents in Radio).

The series is part of the Localore Project with major funding from The Corporation for Public Broadcasting.

For more information about The Making Of… visit: kqed.org/makingof

← The Pauls Are In Kentucky, Right Now!
Aloha! The Paul’s talk straw with NEWT from Hawaii ! →